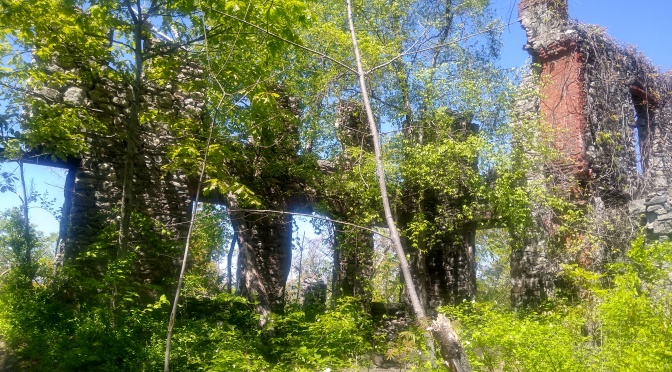 As you round a clear blue lake, a second, smaller path winds away from the main trail. Up this path, on a peak covered with flowers, lie the remains of a vast stone edifice.

This is Van Slyke Castle in Ramapo State Forest in Oakland, NJ, just 30 miles from midtown Manhattan. I visited with a friend last week and was mesmerized by the spooky ruins and the beautiful natural setting.

Van Slyke Castle was built by a wealthy stockbroker named William Porter at the beginning of the 20th century. After his death in a car crash, his widow Ruth married attorney Warren Van Slyke, who lent his name to the manse.

After Ruth’s death, the castle fell into disrepair, and burned down in 1959:

Ruth died in 1940, leaving the castle without an owner for nine years. It was finally purchased in 1949 by a couple who subsequently resold the property two years later to Suzanne S. Christie. She abandoned it shortly after. No one knows why she left the place, though it’s suspected it could have been the result of a bitter divorce.

After years of desertion, the mansion met its fiery demise when vandals broke in and set the place ablaze.

More on the history of the castle here.

The stone ruins are expansive. Though the structure is overgrown, the pipes are still visible and behind the house is the remains of a large swimming pool.

Beautiful flowers are everywhere. Perhaps Ruth Van Slyke planted them? From the peak, you can see the New York City skyline in silhouette in the distance, a marked contrast to the woodsy surroundings.

My friend and I lied on a rock near the castle and enjoyed the sun, flowers, and beautiful lake view. As we descended, I reflected on how amazing it is that inside this beautiful woods was a grand castle we could’ve easily missed.

If you haven’t been to Ramapo State Forest, I strongly recommend it! The scenery is beautiful and the hiking is easy. Add great views and the odd chipmunk, and it’s hard to beat!

Dig into these posts for more on the outdoors in New Jersey:

If you found this post interesting, please share it on Twitter/Reddit/etc. using the buttons at the bottom of the page. This helps more people find the blog!

This platform lets me diversify my real estate investments so I’m not too exposed to any one market. I’ve invested since 2018 and returns have been good so far. More on Fundrise in this post.

If you decide to invest in Fundrise, you can use this link to get your management fees waived for 90 days. With their 1% management fee, this could save you $250 on a $100,000 account. I will also get a fee waiver for 90-365 days, depending on what type of account you open.

The only place I buy vitamins and supplements. I recently placed an order and received it in less than 48 hours with free shipping! I compared the prices and they were lower than Amazon. I also love how they test a lot of the vitamins so that you know you’re getting what the label says. This isn’t always the case with supplements.

My wife and I have gotten organic produce shipped to our house by Misfits for over a year. It’s never once disappointed me. Every fruit and vegetable is super fresh and packed with flavor. I thought radishes were cold, tasteless little lumps at salad bars until I tried theirs! They’re peppery, colorful and crunchy! I wrote a detailed review of Misfits here.