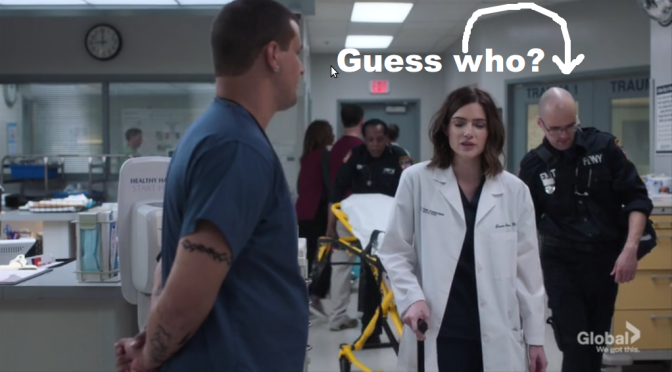 My wife is from Japan and in our five years of marriage, I’ve become very close with her family. But, given today’s restrictions, I can’t see them any time soon.

But they saw me! My wife’s mother and sister watch New Amsterdam, a hospital drama shot in New York City. I appeared in this episode as an EMT, my first time acting. I’m only a background actor (also known as an extra), but it was a very fun experience!

I really enjoyed seeing how a TV show is made from the inside. Also, perhaps due to its high ratings, New Amsterdam has incredible food. Sushi, filet of sole, unbelievable!

The second season of New Amsterdam is now available in Japan and recently, my sister-in-law texted me to let me know her and her mother saw me pushing a stretcher and immediately knew it was me! It makes me really happy to be able to share something fun I’m doing with them. It also makes me feel closer to them since at least they’re seeing me in some way.

My in-laws had actually seen me on TV before. In my first full day ever in Japan in 2014, I happened to be on the national news. I was walking here, and a news program was filming a feature on increasing tourism in Japan. I had no idea they were there but my head wound up prominently visible in the footage. My wife was miffed that despite a lifetime in Japan, she had never been on TV! Her modest stature excluded her even from this shot. She still awaits her chance at stardom.

Interesting little tidbit from that episode of New Amsterdam: the actor on the other end of that stretcher was pushing it very quickly and the stretcher was extremely heavy. We had maybe 2 inches of clearance behind one of the main characters, a very nice lady named Janet Montgomery.

I kept trying to slow the stretcher down before we take out this very small lady. In this episode, she’s pretending to walk with a cast, and we didn’t need her to wind up in a real one!

After this episode, I did another day on New Amsterdam, an episode of Law & Order: Special Victims Unit, and an episode of Netflix’s The Politician. It’s an enjoyable hobby.

Shows are still filming in NYC but only very few, and the safety situation concerns me, so it’ll probably be months before I return. But I look forward to it!