Today I attended a fascinating discussion of the movie Human Nature, a documentary on CRISPR gene editing. Nobel Prize winner Jennifer Doudna, the co-inventor of CRISPR, gave us her perspective on the technology. Author Walter Isaacson and the filmmaker, Adam Bolt, also gave valuable insights.

Isaacson framed the moment well, saying that CRISPR is part of the 3rd great scientific revolution. The first was in the first half of the 20th century, in physics. The 2nd, in information technology, consumed the second half of the century. And in the 21st century, the revolution is and will be in the life sciences.

Because CRISPR can make DNA and RNA programmable like computer code, there’s a strong parallel between CRISPR and the IT revolution. What if biology and medicine progressed the way software has in the last few decades?

Doudna is particularly excited about the applications of CRISPR to cure cancer. CRISPR can be used to program the patient’s immune cells to attack tumors. This echoes what the co-founders of BioNTech said earlier this week at a call I attended.

Bolt and Doudna also noted that CRISPR was a scientific backwater at first. This really emphasizes the importance of funding basic science with no clear application. We never know where it will lead!

The first patient to be treated for sickle cell anemia using CRISPR is doing quite well a year later. Doudna and others are hard at work on further applications of this technology. As an investor and as a human being, I am eagerly anticipating these breakthroughs.

“Jennifer Doudna” by Koninklijke Nederlandse Akademie van Wetenschappen is licensed under CC BY 2.0

BioNTech, the company behind one of the best COVID vaccines, has reported excellent results in curing an MS-like disease in mice. The treated animals showed no signs of the disease, and those that were already having MS symptoms got better. These results were recently published in the journal Science. You can find an excellent discussion of these results by the Harvard epidemiologist Eric Feigl-Ding here.

This MS vaccine uses the same MRNA approach as the two most effective COVID vaccines. BioNTech plans to use a similar technique to produce personalized cancer vaccines.

A new age in medicine may be dawning. 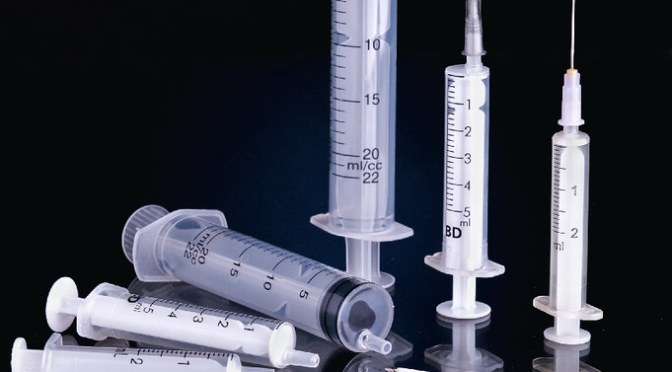 About ninety minutes ago, my dear friend Laura* received the Moderna COVID vaccine. She’s the first person I know to receive the Moderna one, and she reports that she hasn’t felt a thing so far. No pain or side effects of any kind.

Laura works in a medical facility and got severely ill with COVID this spring. I’m very happy for her that she is now protected as she goes about her work of protecting others.

She sent me a picture she took right after, and she looked more happy and relaxed than she has in a long time. They even get a cute sticker to show they got the vaccine!

We hear a lot about COVID vaccines and their side effects, but now I know two people who have actually received one (another friend just got the Pfizer vaccine). Hearing directly from a trusted friend rather than a news report gives me enormous confidence and peace of mind.

Talk about hope for our new year!

*Not her real name

“medical syringes” by begemot_dn is licensed under CC BY-NC 2.0